Time and time again, Makoto Shinkai has shown that anime films don’t have to be creations of Hayao Miyazaki for them to be successful in Japan and abroad. He made a huge splash in 2016 with the release of his largest movie, your name, cementing his own name in the minds of fans as an alternative to the entrenched studio that is Ghibli. Weathering with You has given Shinkai another claim to fame in the film industry with this fantasy/sci-fi take on the adolescent romance genre.

Centered around the legend of the sunshine girls, or those people who bring sunshine with them wherever they go, Weathering with You brings a runaway and an orphan together in a wild romance and adventure as unending rains pummel Tokyo. High school runaway Hodaka and orphan Hina meet in the streets of Tokyo, coming to rely on each other, eventually forming a ragtag family of sorts. Eventually Hina reveals that she can manipulate the weather, bringing sunshine in a time of unending rain. But her abilities come at a price, as they both soon find out.

Shinkai movies, especially his last one, your name, have always tried to stretch what they could do with their animation. Weathering with You is no different. The animation is fantastic, incorporating the atmosphere of a rainy, gloomy Japan juxtaposed to a break if sunshine to create some really great color contrasts, moods, and lighting throughout the movie. The way the sun beams reflect through the clouds and off the buildings of Tokyo create small moments of positivity in an overwhelming mood of gloom.

Not to mention the rain! Shinkai definitely paid special attention to animating the rain throughout the movie. It was enough to make me think of Garden of Words with the level of detail, but with enough stylization to lean a little more towards Ghibli. The level of detail was absolutely necessary considering the story and setting. It lent itself to the overall mood of the movie, drawing the viewer in with its specific eye candy.

But all of this attention on weather details serves more of a purpose than just eye candy, it helps further Shinkai’s message of the impact of weather and climate change on people and communities. In an interview after the movie, Shinkai admits that one of his inspirations for making this movie was the impact of climate change and how important it is to pay attention to and care for the environment. The neverending rains plaguing Tokyo is both a sign of changing climate and a sign, according to the mythology of the movie, that the world is retaliating against humanity, turning Tokyo back into Edo bay.

Shinkai has also said in interviews that part of his focus on weather was not only the effects of climate change, but also how the Japanese view of the weather and seasons in Japan has changed as their weather has worsened. And I think this has a lot to do with how humans see and relate to their environment and how the weather can affect someone’s psyche. We all understand that as light decreases and the seasons change, our mood worsens and cases of depression increase. Whether it’s due to a vitamin deficiency or a psychological disorder, humanity’s connection to the environment is a clear one. Through Hina’s efforts to bring sunshine to those around her, we see the powerful impact that a sunny day has on the moods and emotions of those around her. She brings a touch of happiness in a neverending gloom.

At another level outside of animation and technical skill, Shinkai’s choice and skill in working with the musical creators he hires for his films has also created a greater level of cohesion within the film. Shinkai stated in the interview after the film that his work with the band that did most of the music, Radwimps, became a fairly cooperative partnership as the film developed. Before the plot of the film was even finalized, Shinkai was listening to the music they sent him and then creating something he felt would fit with their songs. Basically the tone and sound of the film was created in conjunction with Radwimps. It made for a more cohesive sound and some great songs throughout the movie. 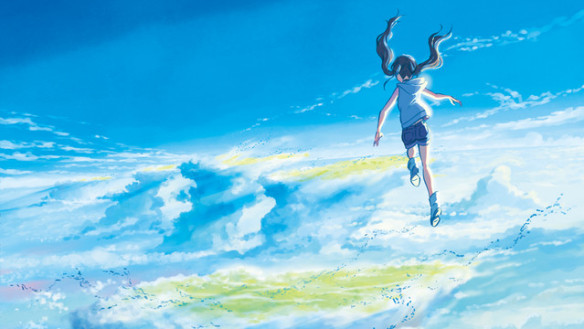 What I’m always drawn to about Shinkai movies though is how he incorporates sci-fi and fantasy into his stories. Weathering with You takes the mythology behind sunshine and rain girls, asian dragons, and a futuristic almost apocalyptic depiction of climate change as it could affect Tokyo. Tokyo is beset by neverending rains brought upon by ancient dragons in the sky. As the movie progresses we see this idea unfold of a world above the clouds, full of water creatures, dragons, and a grassy field atop a thunderhead. The rain itself seems to take on a life of its own, becoming violent, angry, and overwhelming. Not even Hina’s magical connection with the sky could stave it off for long, and in fact, it begins to take its toll on her body in return. Shinkai has a tendency to pit young people against overwhelming odds and the inevitability of nature, the world, and forces outside their control to put together a truly powerful story. 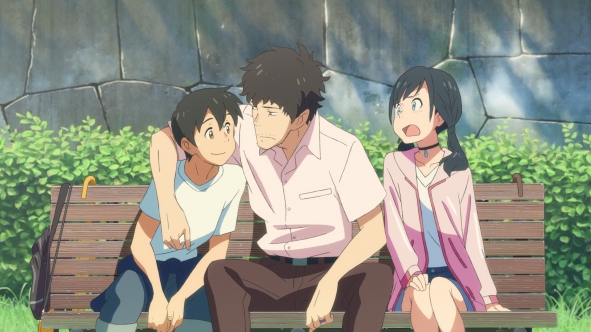 I truly enjoyed Weathering with You, its story, characters, and setting. I loved the bond that the two main characters formed over the course of the film, as these two young teenagers tried to find and create a family and purpose for themselves in an overwhelming world and city. They’re faced with choices and events no teenager should have to deal with, and they manage to come out of it together by making very tough choices. So if you’re a fan of Shinkai or just a general fan of anime and anime films, I would highly recommend you go see this movie when and if you have the chance. If you have seen it already, let me know what you thought in the comments below.

One thought on “Weathering with You Anime Film Review”