WebToon has quickly become one of my go-to places for digital comics. I’ve talked before on this blog about a few of my favorite series to follow and how the format of WebToons contributes to a new and interesting way to read comics. Today, I’d like to focus on my all-time favorite WebToon, one that may also be many other people’s favorite as well, Lore Olympus. It is one of the top read and loved comics on the platform and has started to transcend its home on WebToons to different mediums. As recently as October of last year, it was announced that the series would be picked up by the Jim Henson Company for a young adult animated series, and it was nominated last year for the Eisner Award for Best Webcomic (unfortunately it didn’t win). It is by far one of the most unique and interesting webcomics I’ve read in a long time. The art, story, style, and characters all come together to keep you reading chapter after chapter.

Written and created by Rachel Smythe, the story of Lore Olympus pulls from the old legends and stories of Greek mythology, merging them with the modern world into an interesting take on some ancient tales most of us would be familiar with. For the most part, the plot centers around the character of Persephone, goddess of Spring, as she leaves her sheltered life living with her mother Demeter and embarks on her own journey of learning and self discovery. We follow her as she struggles with whether or not she wants to take an oath to remain chaste for the rest of her life, her relationships with the other gods and goddesses around her, and specifically her blooming relationship with Hades, the god of the Underworld. 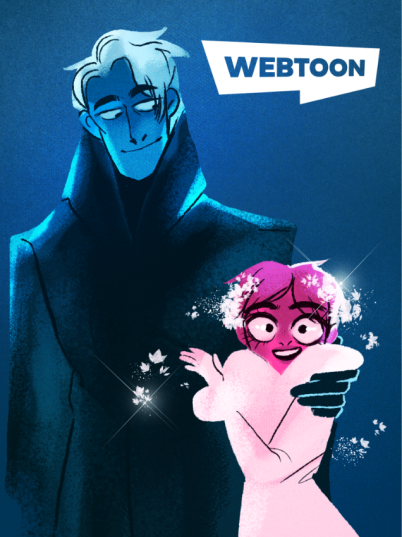 I was hesitant at first to pick up this series because I can be fairly picky about the kind of art I like in comics. At first her art can be a bit jarring, mostly because it is so different than what I’m used to. Smythe has created a very stylized way of drawing that combines vibrant colors and simplified line work to create a stunning look all her own. I very quickly fell in love with the comic’s style and honestly I think it works for a story that deals in myth and the magical world of Mount Olympus. Each character is given their own color and are drawn in shades of that color throughout the comic. Persephone, for example, is only drawn in shades of pink and Hades is only drawn in shades of blue. This can contribute to some very striking contrasts, especially when Persephone ventures down into the realm of the Underworld, which is appropriately drawn in darker shades of blue, gray, and purple. She becomes like a beacon of life in a place full of death, which I think was the point Smythe was going for. 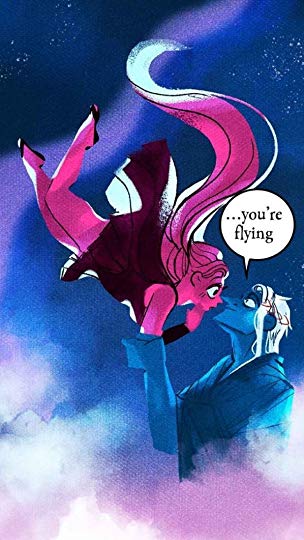 One of the benefits of being created for the platform of WebToons is their unique format for reading comics. Traditionally, comics were usually drawn to be read horizontally, but Webtoons has creators draw comics for a vertical reading format. This allows them to be more phone friendly and easier to read on-the-go with a simple scroll. I think this also allows for some different ways of formatting panels and creating unique ways to draw the reader’s eye down the page. Persephone’s long flowing hair and tendency to float around gives Smythe some interesting opportunities in designing her pages. It also allows her to create these kind of layered panels that unfold bits of the story as you scroll but also form into one cohesive whole. The backgrounds and world building benefit from this format as well, as Smythe creates towering buildings, brilliant night skies over Olympus, and the gloomy yet beautiful cityscape of Hades.

The art is what pulls you in, but the story and characters are really what keep you coming back. I absolutely love the kind of characters that Smythe has transformed these Greek deities into. Hades and Persephone could be conceived as a tragic couple because of the original stories painting their relationship as one based somewhat on force with Persephone being unable to return to the upper world for 6 months out of the year. But in this comic, we see them as an absolutely adorable couple. Hades is painted as a somewhat nerdy recluse whose only love is for his rescue dogs and sometimes his brothers. Persephone is this cute, naive bubble of energy who is still coming into her own sense of confidence and knowledge of the world outside of her mother Demeter’s realm. Together they’re this awkward, nerdy, shy couple full of hilariously cute times together and who genuinely seem to care for one another. Hades seems to be the most respectful and smart one out of his brothers, coming to respect Persephone’s boundaries and wants, not pushing her into anything, and realizing that a relationship with him may not be the best thing for him.

The stories of the Greek gods and goddesses have definitely been updated in this comic, so if you’re looking for a one-to-one retelling of ancient Greek myths you probably won’t like Lore Olympus. It’s created for a modern audience, with some creative reworking done with the stories to come with something that is all Smythe’s unique creation. I think most of the characters retain their most notable attributes from the myths, like Zeus is still a playboy that sleeps around on Hera, Artemis is still a one-woman-no-man-needed ball of spunk, and Apollo is still kind of a jerk. So I wouldn’t say that it completely diverges from the original tales, but it is definitely its own separate and unique take on what these kinds of characters/deities would do in a modern setting.

I do want to make one warning about the content of the series. Lore Olympus can, at times, deal with some heavy themes so I wouldn’t recommend it to everyone, especially if you have trouble with rape, sexual assault, abusive relationships, and depression. I think these themes are handled very well and in a way that doesn’t glorify anything or sweep consequences under the rug. Smythe does a great job at taking a nuanced and compassionate look at serious trauma and how the characters try and recover from said trauma over time. I definitely found myself tearing up at one or two points throughout my read-through. These characters really grow on you after a while and it becomes harder and harder to see them get hurt and have to deal with the aftermath. Which, in a way, is the mark of great storytelling.

So if you’re a fan of ancient Greek Mythology, cute and dramatic love stories, or are just curious what a modern retelling of Greek mythology would look like, I highly encourage you to check this comic out. It is currently sitting at about 95 chapters on WebToons, but every time I read through them it seems to go way too fast for me, mostly because I get sucked right back into the world. If you’re also a fan of Lore Olympus, leave a comment down below telling me who you’re favorite god or goddess is. I’m in love with the huge softy/dog lover Hades.