Arima Kousei is haunted by the figure of his deceased mother anytime he tries to play the piano to the point where he can no longer hear the notes. After a mental breakdown at the age of twelve while performing in a piano competition, he has sworn to never touch those keys ever again. But when he meets the eccentric violinist Miyazono Kaori one day in April, he is drawn to her free spirit and nontraditional way of playing. Soon, he is dragged along by her fierce need to play music and is thrust back into the competitive circuit that he swore off two years ago. Can Kaori help dispel the looming regret of his mother’s death? And can Arima come to terms with the fact that the woman he has come to love loves someone else?

Your Lie in April is filled with a great mix of tragedy and inspiration as Arima and the other musicians grow their passion for music. Through great direction, characterization, and music, we follow the trials that Arima has to face in order to overcome the ghost of his mother and develop a new love for the piano. Once called a child genius, his mother’s puppet, and the human metronome, Arima learns to throw off the conventions of traditional music and better express his emotions through his playing by being with Kaori. Flashbacks to his childhood also show us his relationship with his best friends Tsubaki and Watari and the events that lead up to his mother’s death. I quickly came to love this anime from the great opening to the heart-wrenching moments made possible by impeccable direction. While there were unfortunately moments that frustrated me at times, I do think this anime does a great job at telling a pretty complex love story.

A show about music better have great music throughout, and Your Lie in April doesn’t disappoint. The first opening (“Hikaru Nara” by Goose House) captures your attention pretty quickly and excites you even before the episode starts. Besides the music, the opening does a great job of introducing us to the characters and showing us a little bit of their personalities before we meet them. The first ending theme (“Kirameki” by Wacci) is also just as good with a more subdued feeling that got me even more interested in paying attention to the rest of the music in future episodes. However, the other opening and ending themes I thought were pretty lackluster in comparison. The second opening really can’t compare to the first and that made it kind of a let down in a way. But this doesn’t take away from the awesome music used throughout the episodes, both when they’re playing and backing certain scenes. Unlike other animes that claim to be about music (looking at you K-ON), Your Lie in April really makes it a point to fill their episodes with as many great pieces as they can.

A-1 Pictures was the studio in charge of the animations, and I have to say I think they did a very good job of capturing the feel of each scene by utilizing some great cinematography. The motions of the characters are fluid where they need to be such as Kaori’s violin playing, but I have quite a few problems with their use of 3-D modeling. For an anime about playing the piano, their use of 3-D modeling for Arima’s and every other shot of someone playing the piano is pretty horrible. The 3-D hands don’t match the rest of the animation and makes the movements of their hands choppy and just generally looks gross. I would argue these scenes are one of the most important parts of the anime and to have them ruined by shoddy 3-D frustrated me. I was hoping it would improve over the course of the series, but that didn’t happen either. It was pretty disappointing, though I will say this is the only big problem I have with the series.

Your Lie in April puts its great music and animation to work telling a compelling story equally tragic and romantic. Following themes of terminal illness, the meaning of a hero, and the pressures of performing, this anime will most certainly make you cry and be inspired in equal amounts. Most of the romance revolves around the relationship between Arima and Kaori by using the motif of color. To Arima who is still reeling from the death of his mother and the regret that surrounds it, his world has devolved into monochrome. All his passion for music has dissipated after he had a breakdown at a competition two years ago that left him unable to hear the notes anymore. Tsubaki mentions that the moment you see the person you love, your world will be filled with color. When Kaori steps into the picture, Arima is struck by her enthusiasm and optimism, and his world quickly becomes filled with vibrant color palettes. Besides romance, the change of color throughout the series also becomes a metaphor for his acceptance of his mother’s death and the renewed passion he has for music. Kaori becomes the catalyst for him, expanding his world and providing the shove he needs to begin to heal. But with this romance, we see a fair amount of hero worship. Kaori is the “bright star” in his world, a character type I like to call the “force of nature” type (you may refer to them as “manic pixie dream girls”), as she comes in and changes his whole outlook on life. 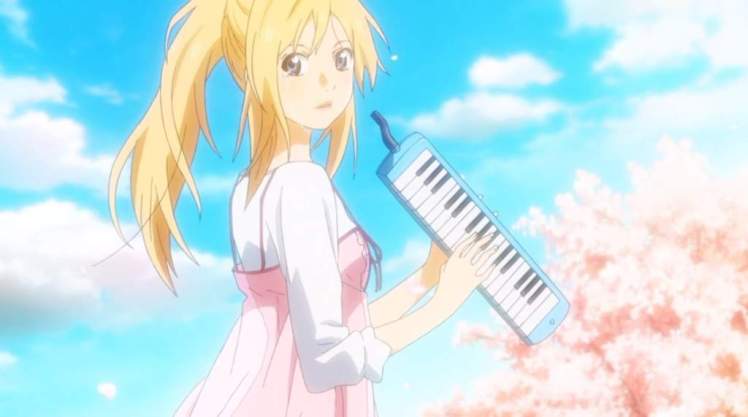 With the introduction of Tsubaki into the love triangle, the romance gets a little more complicated. In this way, I think we start to see a clear difference in their relationships to him. Koari is perfection and the unreachable ideal. She’s the hurricane that came in and swept him off his feat and opened his world up again. Tsuabaki is the childhood friend who has stood by him all his life even through the abuse from his mother. In Arima’s eyes, she’s the rock he can lean on and someone he knows will always be there for him. Your Lie in April likes to use another motif here: comparing Kaori’s time in their lives to April, the season of sakura blossoms just getting ready to scatter. I think in this sense, Arima almost sees her not only as an unreachable ideal but as something fleeting that could disappear at any moment. And while his love for Kaori is quick and powerful, Tsubaki’s is slow and slips in quietly only to be realized at the last moment.

This anime is also supported by it’s cast of great secondary characters. Each one gets a good deal of screen time to explore their pasts, motivations for music, and their relationship with Arima and each other. The flashbacks to Arima, Tsubaki, and Watari’s childhood provide a good base to understand their current relationship and the troubles that they’re facing now. One change I would have liked to see though was more attention played to Watari’s past and character. We get to see a bit of him, but for the most part, he has remained a pretty flat character in my eyes. I felt like there were really only two points in the whole anime that we got to see a deeper side to him, and I feel like that could have been a great addition to the series as a whole. Emi wasn’t as bad in terms of characterization, but I did feel like she didn’t get as much screen time as the rest of them. This kind of left her kind of bland compared to Takeshi.

There’s so much more I could talk about here, but I feel like I would wind up spoiling the second half of the show for you, and this anime is one that you need to experience for yourself to some degree or it won’t have the same impact. Along the same lines of Orange, this series is bound to make your cry so be prepared with some tissues, but there are also a lot of comedic moments that help break up that more serious atmosphere. It definitely gets a lot darker in the second half, but it manages to mix it with some touching and inspirational moments. If you’re looking for a more serious show with some great music and characters, I highly recommend this.

Hey, I’m on Hummingbird now! It’s like the Goodreads for anime and manga. Now you can keep up to date on what I’ve watched and am going to watch in the upcoming seasons. Be sure to follow me there and hit the follow button here for updates! New reviews go up every Saturday and Wednesday!